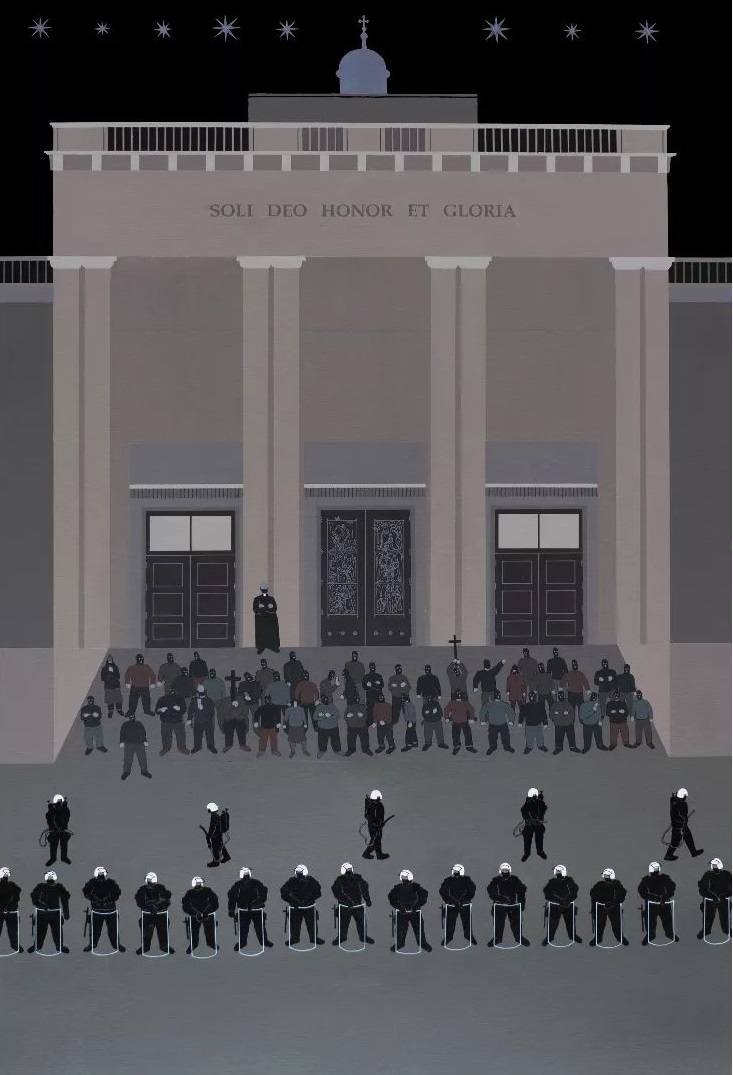 Michał Cygan is an interesting example of an engaged artist, inspired by everything that surrounds us in our daily life – all the things that both local and national press may want to cover. This could be a neighbor dispute, an attack on a LGBT person, mass logging or an anti-government picket.

What stands out in Cygan’s art, however, is the very specific – not to say primitive – aesthetics. The flat-laid colors, lack of 3D and human figures often drawn out of proportion make his painting immediately striking. By the time we can pick out the subject of the painting from the crowd of figures, our attention is already with the artist.

And there is indeed a lot happening on his canvases – like in the paintings of the famous Dutch painter Pieter Bruegel the Elder, known for works such as The Fight Between Carnival with Lent or Netherlandish Proverbs, in which he uncompromisingly depicts human flaws, including brutality and stupidity. In a similar vein, Michał Cygan exposes everything that is embarrassing, ugly and foul in our society, and the choice of simplistic means of expression is a perfect fit for that. This contemporary primitivism blends in seamlessly with our vulgar reality in which there is no room for gentleness and half-measures.

Cygan essentially illustrates everyday life in Poland without glamor, lending spotlight to the neighborhood scenery of the housing estates where one can still get beaten up for wearing a rainbow purse, see pseudo-patriotic masked football fans clash in the streets, or breathe a city-engulfing smog. Michał Cygan also freezes in time the events that have stupefied the public in recent years – the examples include the brutally suppressed Women’s Strikes, the absurd “Battle of Empik” which took place during the Independence March in 2020 between the police and nationalists, or the adoption of an openly homophobic “LGBT-free zones” resolution by Kraśnik councilors.

Another theme close to the artists’ heart is the region of Silesia. Michał Cygan studied at the Academy of Fine Arts in Katowice and, as he himself says, Silesia has been a major influence in his art, constituting a peculiar micro-world embedded in the otherwise more patterned Polish backdrop. The local architecture, especially family houses, and the people shaped by a specific history make frequent appearances in his paintings. At this point, I would like to remind a group of non-professional artists from the Silesian “Janowska Group”, because at least some of his paintings can be considered a contemporary continuation of their achievements.

Michał Cygan’s works offer a blunt look at contemporary Poland, the Polish government, the Catholic Church and the concept of patriotism that’s so misunderstood in the country. Sometimes they border on satire, other times they’re a bitter and ironic commentary, but they are always a deeply personal reflection concealed under caricatured representations.

Pieter Brueghel the Elder, The Fight Between Carnival with Lent, 1559: https://commons.wikimedia.org/wiki/File:Pieter_Bruegel_d._%C3%84._066.jpg