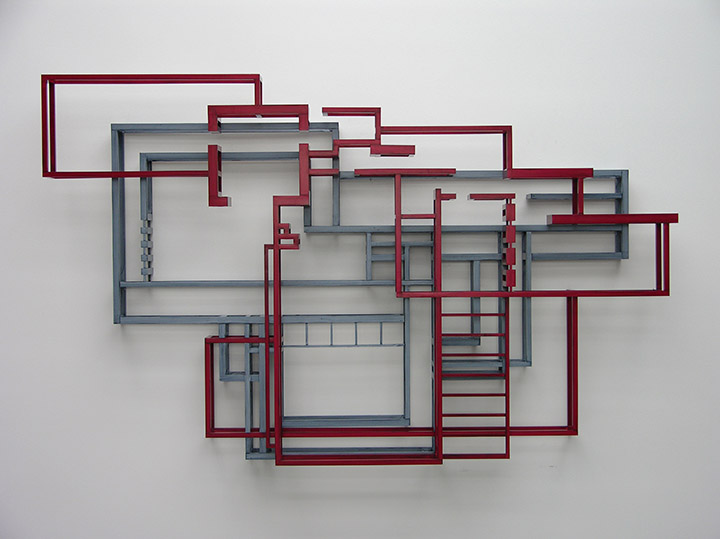 She – the undisputed queen of Hollywood, with dozens of unforgettable roles and a large collection of film awards, including 3 Oscars. He – a sculptor, philanthropist and supportive husband who has been with his queen for almost 25 years now. Even though Meryl Streep needs no introduction, today she will only play a supporting role. The real protagonist will be the American artist Don Gummer, with whom the actress shares her life.

Looking at Gummer’s works, it doesn’t take long to notice what art insiders like to call the ‘evolution of style’.

Initially, Gummer’s main focus was on wall sculptures – geometric structures reminiscent of modernist building models on one hand, and colorful Mondrian arrangements of rectangles on the other. Over time, however, the harmony gave way to chaos. Tangles of colorful, usually metal strips, would soon guide our sight across the canvas, like a maze through which the eye wanders until it finds a way out.

The artist’s style grows along with them. Man lives more, wants more and begins to wander off the beaten path in search of self. Since the 1980s, Gummer’s works have been growing larger, only to break out in the open and decorate public spaces. For Gummer, the access to, and impact of, art on the public is one of the overarching goals an artist should aspire to.

The oversized sculptures made of bronze, metal or steel (sometimes a combination of these) are dynamic, seemingly chaotic, but in fact well-thought-out. These works, based on a composition and structure ideal, are accompanied by objects which echo deconstructivism and defy gravity.

But the real meaning behind these raw structures is only revealed by their titles. Escape (1995) is a tangle of ribbons made of bronze, from which there appears  to be no way out. House of Ideals (2008) is equally perverse in that the elements create a perhaps perfect combination upon matching (though that’s not to say everything fits in perfectly there because it doesn’t). And these are just some of the many examples, because Gummer is an exceptionally prolific artist with a portfolio of works comparable to the number of roles so gracefully incarnated by his famous wife.

Perhaps Don Gummer’s popularity doesn’t go far beyond the artistic circles revolving around contemporary American art. Perhaps not everyone will find his message and style appealing. But then again, isn’t it what creation is all about? Not about glitter and media hype, but about making your visions and ideals come true, leaving the glow of camera flashes to the red carpets of Los Angeles, New York or Cannes.