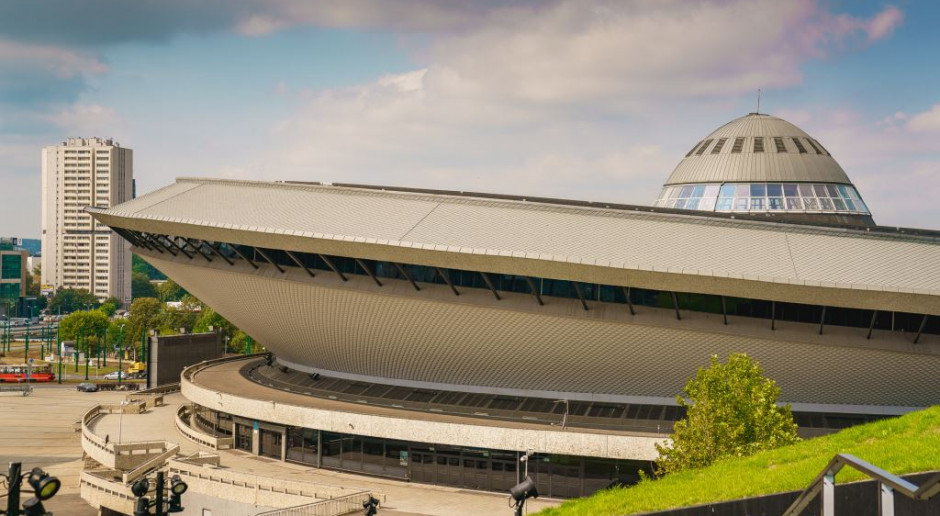 As a child, I used to love The Jetsons animated series. A vision of the future in space, futuristic clothes and robots treated as family members. A fun fact: George Jetson was born in 2022! And if that’s the case, we still seem to be pretty far from those spectacular changes and flying saucers. But are we, though?

The first episode of The Jetsons was aired exactly 60 years ago, and not much later, in 1964, began an avant-garde and then-controversial for Poland’s communist reality construction. Spodek, literally ‘saucer’, was envisaged to soon make its landing in Katowice, the cradle of the Polish People’s Republic mining industry.

The decision to build a sports and entertainment arena complex in Silesia goes back the 1950s. In 1959, the Association of Polish Architects selected the winning design by Maciej Gintowt and Maciej Krasiński, with the participation of Wacław Zalewski and Andrzej Żórawski, the latter responsible for the construction. In the original blueprint, the complex was meant to occupy the site of today’s Silesian Park in Chorzów. However, the bold and original design gained so much appeal among the then owners that the location was changed to the Katowice’s city center, regardless of the difficult post-mining topography.

The modern shape of the venue wasn’t due only to the post-Stalinist Thaw of 1956 and the fact that space exploration was very much in vogue at the time. In fact, it is primarily the result of in-depth mathematical calculations, the aim of which was to create an optimal and functional space serving two main purposes: sports and entertainment.

The opening of the facility was planned for 1971, but the architects were not sure whether the hall, suspended above the ground and making contact with a relatively small piece of surface, would withstand the mass events that it was being lauded for. And how was this solved? In a truly communist fashion, one could say, that is thanks to the military. 4,000 soldiers were called in to march, jump, stomp, sing and shout, all under the watchful eye of the Chief Statistics Officer. The arena survived that planned invasion and so it was deemed ready to receive the real audiences.

Spodek remains a unique piece of architecture in many ways. As far as design is concerned, it’s the structure of its roof that’s the most impressive, resembling a bicycle wheel and applying the principle of tensegrity (the mutual stabilization of tension and compression elements). But it’s not only technical solutions that distinguish the building from others like it. In 1972, the facility was visited by Fidel Castro himself where for over six hours he spoke to the youth gathered in the audience. Interestingly, to give proof to the friendship of the Polish People’s Republic and Cuba, the dictator gave up his characteristic uniform in favor of a mining uniform.

To this day, Spodek – whose name was coined somewhere between the late 1970s and early 1980s (the original name being the Provincial Sports and Entertainment Hall) remains a symbol of the city of Katowice, one of the most interesting architecture gems of post-war Poland, as well as a venue that has since hosted the world’s biggest celebrities such as Elton John or Iron Maiden.