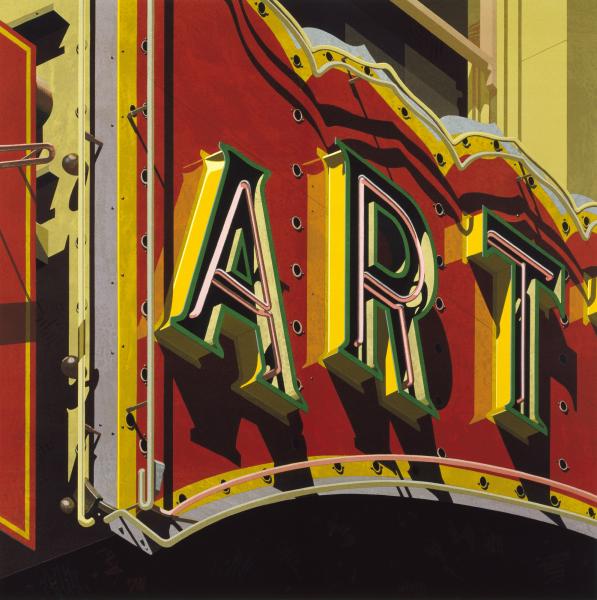 A quick skim through the history of art shows that literally anything – from historical battles to tomato soup cans – can be a source of inspiration and a subject for artistic creation. On a museum wall, a portrait of a queen can go together with an image of a famous actress, for it is not only what is depicted that matters, but also what the underlying meaning and the artist’s intentions are. A great case study for that is the works of an American artist, Robert Cottingham.

His canvases typically show store fronts, facades, colourful neon signs and advertisements. With meticulous care for details and colour, his snapshot-like paintings depict the American urban landscape of the 1970s and 80s – the kinds of sights people would pass by everyday while walking the streets and running their errands. Why is the artist so interested in such a mundane subject? Given his former career in advertising, it’s not surprising Cottingham has kept his eye on colourful commercial signs even after dedicating himself entirely to painting.

Although his canvases are often described as photorealist or hyperrealist, the artist himself sees his work in the  broader perspective of the American vernacular Realism tradition, having been inspired by artists such as Charles Demuth, Charles Sheeler and Edward Hopper. Indeed, his paintings offer more than a mere reproduction of photographs on canvas.

The main subject-matter of his works are objects related to the history, cultural heritage and geography of the United States, known as ‘Americana’. This umbrella term describes a wide range of things representative of the country, its people and traditions, such as the Statue of Liberty, yellow NYC cabs, but also sign boards and neons brightening the streets of American cities.

The photographic accuracy of Cottingham’s canvases from the 60s, 70s and 80s turns them into a unique painted chronicle of the evolution of urban landscape. They not only document the glitz and glamour of the big cities bedazzling passerby with bright neons and flashy advertisements, but also reflect the changes in design and typography over the  decades.

Contrary to what is taught at schools, the history of each nation doesn’t consist solely of those transformative, time-defining events and famous individuals, who bring that change about. It is equally a collection of mundane experiences of unremarkable folks. Against the backdrop of geopolitical tensions during the Cold War, everyday ordinary life went on. People continued to shop and visit movie theaters and restaurants, whose fronts and signs were so carefully and beautifully captured by Robert Cottingham.