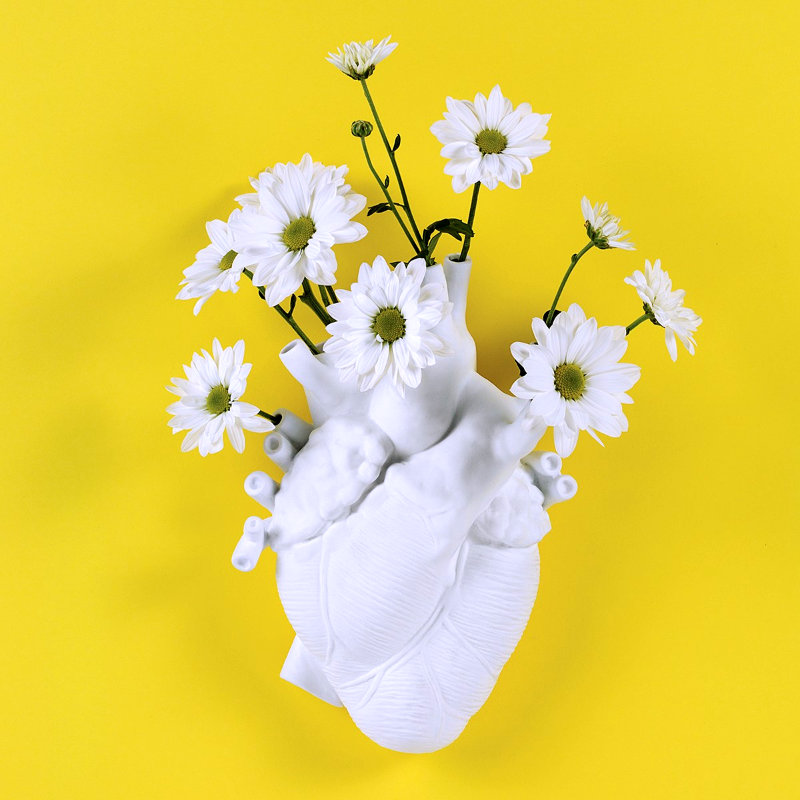 Depictions of human organs and body parts are a common sight in medical offices and university auditoriums. Hands, feet, lips and hearts can also decorate and completely transform the appearance of our living rooms. We’re not talking about Halloween decorations or vintage medical drawings but the intriguing artworks of Marcantonio Raimondi Malerba.

Malerba is arguably one of the most esteemed Italian art designers of his generation. His whimsical, uncompromising projects bring to mind the magical fantasy world of Alice in Wonderland. And his most popular and successful designs have been created together with Seletti, the cult Italian brand.

The first collaborative collection that we want to mention — “Love in Bloom” — literally stole our hearts, pun intended. The exquisitely made anatomical heart is in fact an extraordinary vase, coming in three styles: white, gold and glass. Once flower stems are inserted into the arteries and veins, it bursts with life and, despite being mass produced, takes on an individualised appearance.

Another collection is the “Memorabilia Mvsevm”, where nine objects designed by Malerba depict human body parts. If you like out-of-the-box design, you can decorate your living room with porcelain feet, hands, eyes, noses, ears, lips, or even… male genitalia. But what inspired the artist to turn these mutilated organs into complete works of art?

A clue lies within the collection’s name. Memorabilia are objects treasured for their sentimental and historical values; they are often kept in museums, just like the remnants of Ancient Greek and Roman sculptures. One of the best known ancient statues is the Colossus of Constantine, whose only remaining pieces today are the head, the right arm and hand, and parts of the legs which include both feet. Doesn’t this list of fragments sound similar to the description of “Memorabilia Mvsevm”?

However, the Colossus of Constantine is no exception. Many masterpieces of ancient sculpture are known to us solely from their remaining fragments. Take the Winged Victory of Samothrace for  example. Though faceless, this iconic statue of goddess Nike is one of the most coveted artworks in the Parisian Louvre. Dozens of other similarly mutilated statues can be found in museums around the world. However, their fragmented nature hasn’t diminished their value. On the contrary, the fact that so little survived makes every remaining foot or nose that much more precious and sought after.

In this context, the objects designed by Malerba take on a new layer of meaning. They’re more than just curiosities meant to stagger. His whimsical creations prove that even today, antiquity remains one of the richest sources of inspiration for contemporary designers and artists.