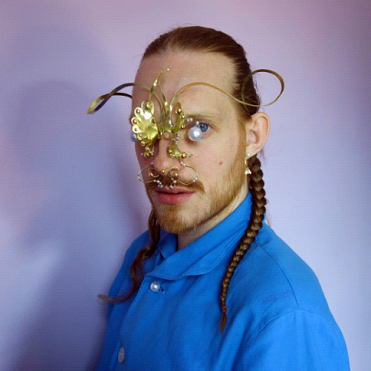 We live in the times where wearing a mask has taken on particularly negative connotations of the global pandemic, restrictions of one’s personal freedom and the constant sense of threat. There is a man, however, for whom the mask opens a door to artistic freedom.

Known for his high profile collaborations with Damien Hirst and Björk, the Oxford graduate in Ancient Greek — James T. Merry —is a true needlework whisperer. He was recently featured in the GQ and Gucci Film Series, The Performers. Two of his mask designs were also worn by Tilda Swinton at the Venice International Film Festival last year, instantly becoming the biggest showstoppers on the red carpet.

In Merry’s hands, the shining, perfectly tooled metal alloys turn into organic flowy forms. Together with pearls covering the eyes, they make the actress’ face appear out of this world. Indeed, the shapes resembling stingray skeletons and seaweed have more transformative power than most of the make-up looks we have had a chance to see on any red carpet.

Merry’s masks, especially the ones created for Björk, are true objets d’art, allowing the wearers to morph their physiognomies into rippling seaweed, blooming orchids or aquatic creatures. They blur the distinction between the human and the (super)natural world. They explore the idea of biophilia — an innate human need for connections with other beings and nature — a growing trend in response to the world around us becoming more technology driven than ever.

It doesn’t mean, however, that the artist rejects modern technologies all together. They are after all, a great means of artistic expression. Take the masks for example. If you’re dreaming of wearing one yourself — dream no longer. Head over to Merry’s or Björk’s Instagram account and use one of his specially designed filters to put a digital mask on. Whom do you think it will transform you into?