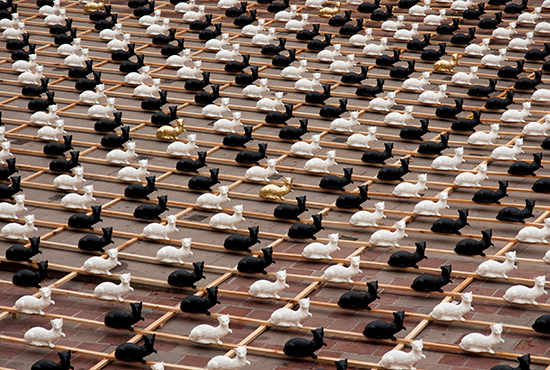 What is the most reproduced artwork of all time? For us, that’s a tie between Leonardo da Vinci’s The Mona Lisa and his The Lady with an Ermine. The fame of these two portraits has certainly spread all over the world. Krakow residents had the rare privilege of being able to admire The Lady without even setting a foot in the museum, as a billboard depicting Cecilia Gallerani hung for many months on the main building of the local National Museum. All you had to was drive along Mickiewicz Avenue to have a look at a world-class masterpiece on the go.

So much has been said about the painting itself that it’s hard to add anything new to the conversation. However, reading Katarzyna Blik’s great book Najdroższa. Podwójne życie Damy z gronostajem [The Dearest. The Double Life of the Lady with an Ermine] inspired me to elaborate on how the portrait of Cecilia Gallerani functions in art and pop culture. Both the Lady and the Ermine have lived to see some truly surprising reinterpretations. We can only wonder what Leonardo himself would have thought about them!

Let us start with Poland and the unique work Żegnam państwa by Jerzy Kosałka, which is found in the MOCAK (that’s Krakow’s Museum of Contemporary Art) collection. In this take on the famous portrait, the ermine breaks free from the canvas and finds freedom sitting unashamed on the wooden frame. Many interpretations of the masterpiece have revolved around what the little animal could possibly represent. Kosałka in his work frees the pet from the shackles of interpretation, at the same time placing it above the Lady.

Face swap is a hugely popular online trend in which two people in a photo swap faces with one another. But before it was made possible by mobile apps, a similar attempt was made by Svjetlan Junaković, author of The Great Book of Animal Portraits. In his version of the Leonardian portrait, Cecilia Gallerani holds the ermine in her arms but having herself the head of the ermine that was transformed in an incredibly precise, almost surgical way!

With our attention on the ermine, we can’t but mention another artist who put this little animal in the spotlight. Ottmar Hörl is known for creating extensive installations in urban spaces, consisting of several identical sculptures that differ only in color. He hasn’t spared the likes of Beethoven, Einstein, Dürer’s Young Hare, or last but not least, Leonard’s ermine. In 2009, 1,500 black and white figurines blanketed Maria Magdalena Square in Krakow to form a unique chessboard. Here, the masterpiece was stripped down to just one element and yet it didn’t make it any less recognizable.

The Lady with an Ermine also became the talk of the town along with the release of Lupin, a series telling the story of a quirky thief played by Omar Sy. On that occasion, Netflix and the National Museum in Krakow launched a very interesting advertising campaign. On one face of the Museum’s building there is a billboard showing the Lady with her necklace missing. Next to it is a free-standing ad for the series showing Lupin holding the necklace in his hands, with the caption that reads “Merci Madame”. This is some world-class marketing if we’ve ever seen one!

Now it’s your turn – what reinterpretations of famous artworks have you come across?

Netflix campaign: Twitter from the National Museum in Kraków (screen)