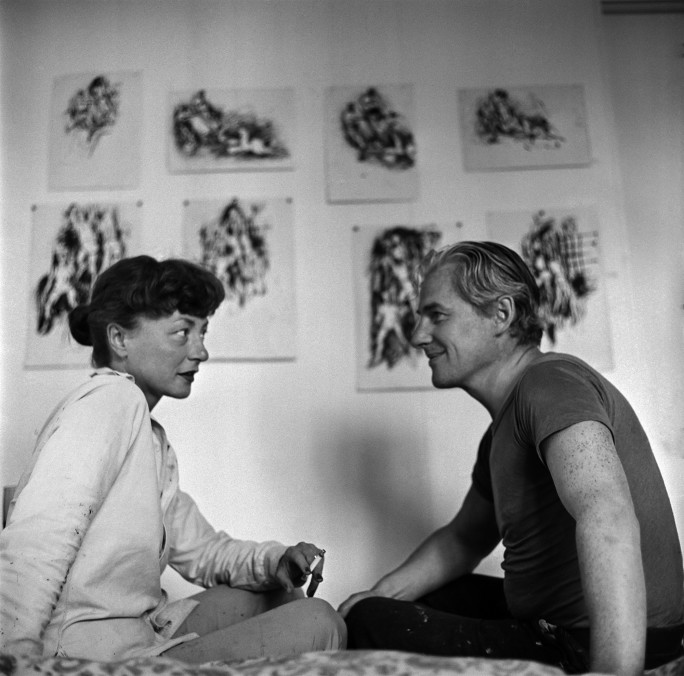 To this day, we can often hear someone say: ‘she’s with him for his money’ or ‘for his fame’. But what if he became famous thanks to her? What if she was better than him?

Elaine de Kooning née Friend is one such person. Born in Brooklyn and taken by her mother to the Metropolitan Museum at the age of 5, the child prodigy combined talent with her passion for being the best. As a child, she was surrounded by the reproductions of paintings by Raphael and Rembrandt that were hung in her room by her mother. And so began a process that, once set in motion, couldn’t be stopped. At the age of 8, Elaine draws portraits of friends to earn money and a few years later she drops out of school to enroll in the Leonardo da Vinci Art School.

And there she meets him, a young Dutch painter who arrives in New York as a stowaway. He’s the complete opposite of Elaine – slow, prudent in his work and often gloomy. He falls in love with the beautiful, lively, talented and flirtatious American girl. Willem de Kooning became a mentor for his future wife who taught her the confidence to portray people. Under his watchful eye, Elaine fulfills herself as one of the best drawer to have ever graced the art world.

As Willem grew to fame, Elaine would soon make acquaintances with many of his artistic friends, including Gorky, Kline and Newman. She felt at ease in social settings, and as a New Yorker she knew many people in the city and everyone knew about her. The group would hang out at Cedar Tavern in Greenwich Village discussing the theory of art with Pollock, Krasner, and Rivers. And Elaine truly excelled at art theory, as was later confirmed by her lecturing at several American universities.

When the young couple got married in 1943, Elaine decided to focus on her husband’s career, including her frequent love affairs with art critics, gallery owners and editors. Not only that, all of them would later be reflected in Elaine’s portraits. Her affair with Thomas B. Hess from ArtNews was an open secret (and there’s a portrait drawn by Elaine that proves it). It remains unclear whether Elaine was really after him or if her job as an art critic at ArtNews was a returned favor. Whatever it was, she was brilliant at her job, focusing on the knowledge of trends in art and the confidence of her own views, becoming the first female art critic.

Elaine painted people for fun, starting with family members and ending with writers. When she separated from her husband in 1957, she embraced teaching. She became famous in 1962 thanks to her portrait of J. F. Kennedy. She was asked to spend a few days in Palm Beach at the ‘Winter White House’ and paint the president who was always on the run. Nobody expected her to be so involved in the whole process. It bordered on obsession that culminated two months after Kennedy’s assassination. Elaine stopped painting for an entire year because of her anger and nervous breakdown. Her two finished works are housed at the Truman Library and the JFK Library in Boston.

In 1976, Willem reached out to his wife and asked her for support in overcoming his addiction to alcohol. She bought a house next to his in Palm Springs, took over the management of his studio, and treated Willem with antabuse so that, already as a famous painter, he would not fall into oblivion as an alcoholic.

Elaine de Kooning died in 1989 right after her ‘cave painting’ exhibition at the Fischbach Gallery. Her husband, Willem, lived for another 8 years, painting until the end of his days despite dementia.

Was she better than him? She was probably just as good. Was she with him for his fame or his name? She came back to him only because he asked her to.

When two people in a couple are as talented as they are ambitious, mutual competition can hardly be avoided. The Koonings are a perfect example that, at some point, it might be worth taking it a little easier only to be able to appreciate your feelings – and work – many years later.