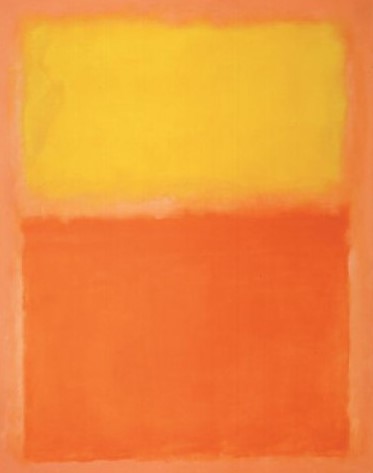 Apparently only he and the viewer should be present in the room. 18 inches from the canvas is the perfect distance to fully experience human emotions: tragedy, ecstasy, doom. To immerse yourself in a painting, you have to hang it low enough to tilt it entirely towards the viewer.

Markus Rothkowitz, also known as Mark Rothko, not only set up rules for admiring his artworks, but also had a nomenclature he would use for his paintings. As an abstractionist, he knew that his output required a consistent approach, even if for outsiders it may have seemed as if he were jumping on the less is more bandwagon, a rather popular trend in the 1940s. Throughout his life, the artist was notoriously secretive about his painting techniques. Only after his death, and thanks to UV, conservators were able to explain the riddle that was kept hidden even from his own studio assistants.

Anyone who follows the art market can see how much Rothko’s large-scale colored canvases bid for. I wonder what the artist himself would make of it, he  who believed his art was a moral act and his paintings – a profound form of communication. He couldn’t understand, and did not accept, whenever his artworks were appreciated only for their color. Rothko was largely inspired by F. Nietzsche’s The Birth of Tragedy, which had a strong influence on his brush work. The juxtaposition of the Apollonian and the Dionysian enabled Rothko to use the adversities to his advantage and find an artistic outlet for them, filling the spiritual void of the man he was at the time.

What did he understand by void? We can’t know for sure, but like Jackson Pollock and Willem de Kooning, he didn’t – and didn’t want to – understand the artistic movement developing in parallel with abstractionism and expressionism. That movement was pop art, which he considered a disrespect for contemporary art and whose very nature was a step backwards, devoid of any artistic depth. Nothing irritated him more than Jasper Johns’ Flag, which contributed nothing to spiritual growth and whose meaning we tried to grasp not so long ago.

Despite his contempt for Haring and Warhol, all three artists had one thing in common: their premature death. Much has been said about the reasons for Rothko’s suicide in 1970. Some say it was depression, aggravated by his second divorce and possibly another aneurysm. Others believe the artist couldn’t come to terms with the young generation of pop artists gaining momentum. Whatever the real reason was, it was not his early death that made Rothko go down in the history of art, but his numerous colors, numbers and Untitled.