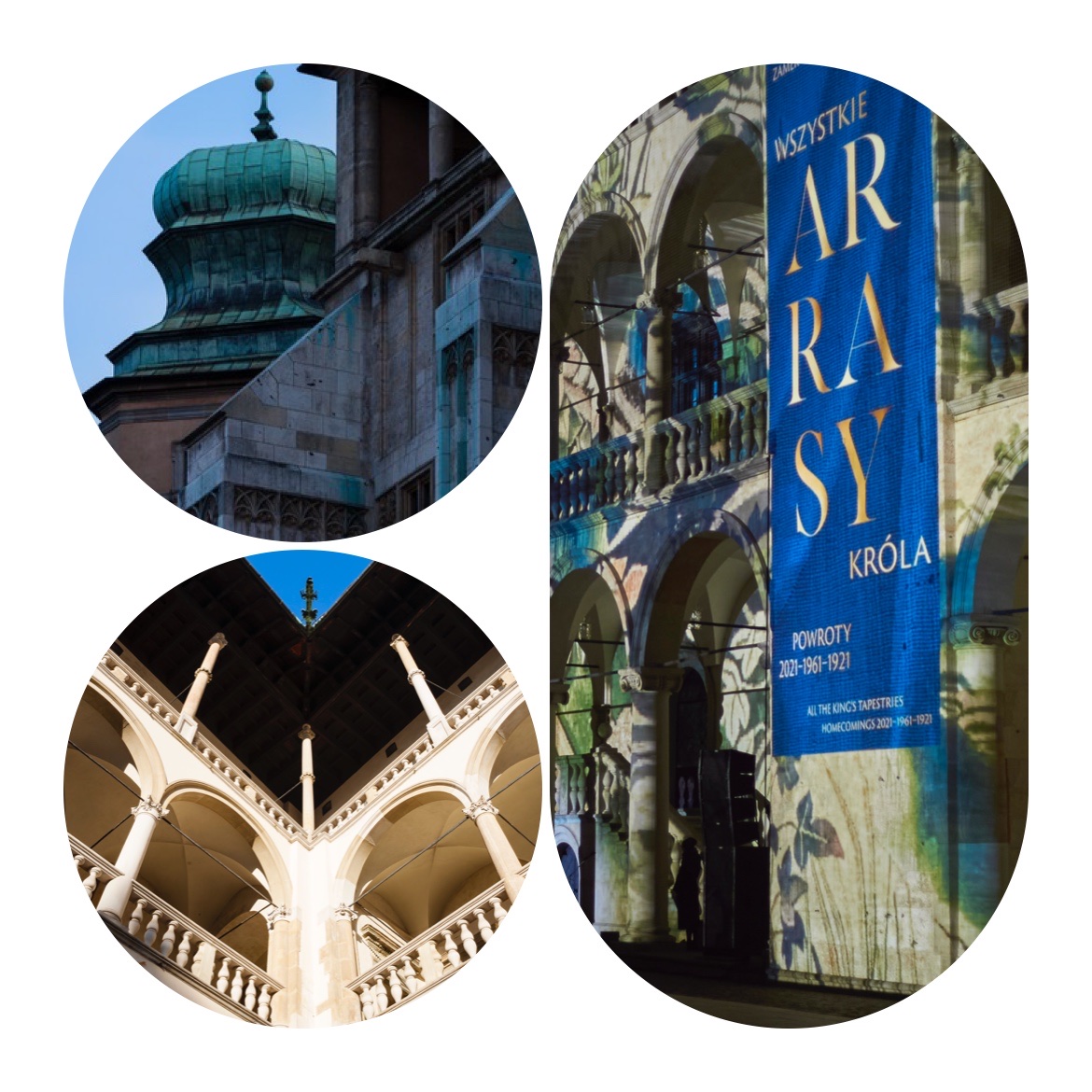 An interview with the Director of the Wawel Royal Castle Andrzej Betlej, Ph.D. and the Director’s Plenipotentiary for Education Marta Graczyńska.

Artbuk: We all want to move on and think of the pandemic as a distant memory, but we have to start right from its outbreak in 2020. And that is because you became the Director at Wawel around that very time.

Andrzej Betlej: A friend of mine once told me: “Jan Ostrowski ran it for 30 years and nothing bad happened. You take over and suddenly there’s a pandemic that’s been going on for two years now” (laughs). As for the challenges, there were many, if only financial, since more than half of Wawel’s revenues come from ticket sales. Next, it was adapting our departments for remote work. Last but not least, we had to find new ways of reaching visitors, including through social media, and letting them know that, despite the museum being closed, it is anything but dead.

Somewhat surprisingly, the pandemic was a fertile time for us. We managed to put quite a few new gems on display: Turkish tents or the non-existent St. Gereon’s Church where the mythical chakra and Renaissance gardens are said to have been located. This reshuffling laid the foundation for what in 2021 became a very successful exhibition called “All the King’s Tapestries. Homecomings 2021 – 1961 – 1921″, with nearly 120,000 visitors

None of the plans or projects envisaged for the museum before the pandemic was left unfinished. In spite of receiving few foreign tourists, in 2021 we already recovered 80% of our pre-pandemic traffic.

Artbuk: Perhaps people grew to miss art after months of lockdown, could that be the reason?

AB: Indeed. One such example is Andrzej Radwański’s magnificent exhibition. It is small and requires a good amount of focus, the opposite of Malczewski’s blockbusters. Two-hundred people came just for the vernissage. This proved how much craving for art the pandemic generated.

Artbuk: It is no secret that the pandemic also accelerated the embrace of multimedia in art. I am referring in particular to VR (Virtual Reality) and the meta world, a reality where one can put on special glasses and visit the museum from anywhere in the world. What is your outlook on that, hot or not?

Marta Graczyńska: The idea is interesting, but Wawel’s history has the opposite effect: it makes one want to unglue from multimedia and take in the atmosphere. Right now, together with the City of Krakow, we are working on an AR (augmented reality) application dedicated to the Wawel Dragon (Bronisław Chromy’s sculpture turns 50 this year). It would be great, for example, to recreate the medieval Piast town sitting on the Wawel Hill. Using this technology, we could potentially show the scale of change that happened from the Middle Ages to the modern era.

AB: Honestly, the VR application is one thing, but it is equally important to make the interior of the medieval Wawel, on top of which its Renaissance version was built, available to visitors. And we’ve taken relevant steps in that direction. What sells people on Wawel is secrets and emotions. We have a chance to tell history through our exhibits. We are developing two new underground routes: in the basements and around the fortifications from the side of the Vistula River.

Artbuk: Wawel being a former royal residence, is there any chance it will one day house contemporary art, too?

AB: Contemporary art is certainly not, and will not be, the mainstream at Wawel, but we are considering several different ideas. Gathering Polish post-war paintings from the Wawel collection and turning them into a cross-sectional exhibition is certainly an option. In addition, a Wyspiański exhibition is planned for 2024.

During the pandemic, we created an online video/exhibition Wawel. A simple thing about the design at Wawel. Many great facilities were designed here in the 1960s, such as those by Marian Sigmund, known primarily for the interiors of Huta Sędzimir’s offices. But having an exhibition dedicated entirely to modern design at Wawel might not be the best idea. Perhaps we could find a way to combine design and modern art.

Wawel gives you many hints, either through its collections or connotations with various places and artists. And because of that we’re not ruling out anything.

Artbuk: Speaking of exhibitions, what would be your dream exhibition if you were given a free hand and there were no limits of any kind?

AB: It would be a huge exhibition called ‘Baroque in Poland’, but this has to do more with me being an art historian at the university. I would have Da Vinci’s drawings, Raphael’s paintings, the whole works – Wawel deserves it.

Artbuk: For an exhibition to be admired, it must be open to all visitors. What is it like at Wawel?

AB: Each space should obviously be made as accessible as possible. We are currently working to renovate the New Treasury to that end. Let’s not forget that Wawel Castle is, after all, a heritage site. You wouldn’t know how hard a time we had finding a space for the wheelchair lift!

We are rearranging the first and second floor, too, to accommodate captions and later also QR codes. Before 2020, our exhibition was captionless and there was one catalog listing all the details available only in Polish. Our idea is to make Wawel inclusive, hence the changes.

Artbuk: The app is also a nod to visitors.

MG: The application was first developed a few years ago and works on the basis of beacons. It can be used in the area of the Wawel Hill but not in exhibitions themselves. Many of our sites can’t be displayed because a large part of the buildings was destroyed. It is a whole Wawel town apart. And the application was designed precisely to tell about the sites that were once here and let your imagination fill in the rest. There are now a dozen or so beacons scattered around the Wawel Hill, with more to come.

AB: The problem with multimedia is they age very rapidly. Which is why, especially with a place like Wawel, you need to tread carefully. That means I’m not going to mount tablets on a cordovan or put a big screen in the Senator’s Hall, but a mobile application is fine.

Artbuk: It is our impression that Wawel is now striving to interact with Krakow residents.

AB: Our main target is domestic tourists, including local residents. Leszek Mazan once said that to be considered a good Cracovian you must visit Wawel at least twice in your life. We would like it to be more than that and we assure you that, even though the walls are old, there’s always something new to discover here.

Wawel is for everyone and so we try to keep it free of clear-cut profiles. If we only had one target group, that would go against the very fabric of ​​Wawel. A good example is the tapestry exhibition, which was set up with no specific audience in mind and ended up attracting visitors of all ages and walks of life. What’s interesting was that, although it was an exhibition of period art, it began with two works of contemporary art: a painting by Maciej Maciejowski and an installation by Mirosław Bałka.

Artbuk: You spend a lot of time at Wawel due to your work. Do you have a favorite spot on Wawel Hill?

MG: For me that would be the gardens. They offer a different view of Krakow and a unique panorama of Wawel itself. It’s a place to catch a breath from tourist crowds and a great example of archaeological and conservation work. It is one of the earlier examples of garden reconstruction in Poland.

AB: As  for me, it would have to be: the Dutch Study, which by the way is open to visitors; Queen Bona’s loggia, which unfortunately is not displayed due to environmental recommendations; and the Senator’s Hall.

Artbuk: You have the amazing privilege of being able to stay at Wawel after hours when it is empty and without tourists.

AB: It’s my second time serving as director of a cultural institution. And what it essentially means is that you work 12-14 hours a day for the first year to relearn everything. When I was leaving the office, Wawel would already be empty and it looked amazing.  I know that word is a cliche these days, but when it was getting dark in the courtyard and the lights were still on, it really was amazing. During my first months at Wawel, my colleagues would often hear me say “at our National Museum in Krakow” and smile at that lapsus. Because of that I would often get asked where I felt better – at Wawel or at the National Museum, but there was no one good answer to that, I’d always seen it as apples and oranges. It was at the end of last year that I got asked that same question again and I involuntarily replied ‘at Wawel’. I really feel at home here 🙂