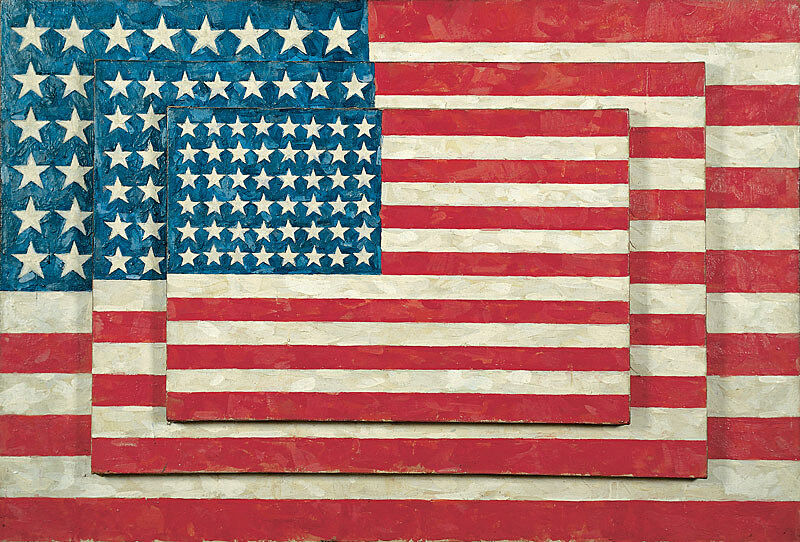 America, the Land of Dreams that attracts outsiders with its tall skyscrapers, magnificent ranches and sculpted bodies.

For THEM, it’s the place on earth where they belong to, regardless of race, sexual orientation or creed.

What do THEY have in common? A flag. Colloquially known as the Stars and Stripes, it carries with it not only a country’s history but also a number of everyday guidelines that apply to every American.

These have been laid out in detail in the American Flag Code and the standards of its respect, the system of flying the flag both inside and outside, at mourning ceremonies, along with and the folding system, which constitute the basic knowledge of every U.S. citizen.

50 stars, 13 stripes – so much and so little sufficed to inspire one of the most famous of Old Glory artists to create an amazing series of over 100 works of art.

Jasper Jones, as he’s the protagonist of this story, perfectly fit into the development of pop-art or minimal-art of the world of that time, all while drawing attention to internal administrative and geopolitical changes (the painting Flag, 1954, shows just 48 stars).

The artist used an existing symbol, emphasizing its importance by multiplying a subject area for which he was well aware of not being its original author.

The lack of a larger message or an announced manifesto means that Jones’ works are meant to be merely ‘seen’, without looking in them for subtexts or hidden meanings.

The artist focuses primarily on the form and its duplication, adding another medium on top. And that medium is definitely the recipient of that, who in recent times has been spending increasingly more on sustaining the American symbol of freedom. The symbol became Jones himself, who is one of the few living artists of 1950s, 60s and 70s still exhibited at the Guggenheim Museum, the MOMA, the Whitney Museum of American Art, among many others. When one of his works turns up at auctions at Christie’s or Sotheby’s, he doesn’t disappoint art dealers who bid for them very generously.

Because the truth is that, being a constitutional, believing in the freedom of the individual, you internally know that you want to fly a flag on your premises. And if so, why not do the same on the wall? The only question is how much it will cost…