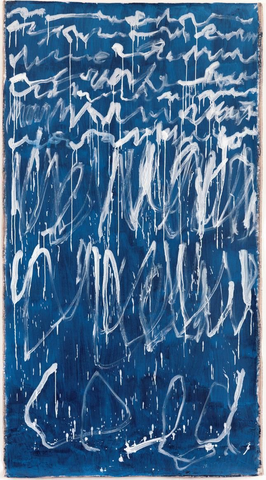 Many of us, looking at a work of art in a museum, may want to exclaim: ‘gosh, what is this!?, ‘how did it end up in a museum?!’ or even, ‘how much is it supposed to be worth?!’. Scribbles of all sorts, because today we are talking about them, are well present in many fields of art. Experts would call this technique expressive abstractionism, but most of us would call it, simply, daub, blotch, spatter, etc. And yet, the works of one of the masters of, if you will, expressive abstractionism consistently reach sky-high amounts at art auctions. That someone is Cy Twombly, or rather, Edwin Parker.

This American painter, born in Virginia, adopted his nickname Cy, which is an abbreviation of the word cyclone, out of admiration for his father. Brought up by a footballer and sports instructor, he decided to use abstract art, surrealism, poetry and Far Eastern calligraphy as a means of expressing his artistic vision. What came out of it? Well, a children’s handwrite.

While studying in New York in the 1950s, as the abstract expressionism trend was gaining momentum, he met other representatives of that movement, including Robert Rauschenberg and Jasper Jones. Like any aspiring young artist, neither he, nor his colleagues were initially embraced by modern painting. In fact, the initial reviews of their efforts were often flat out negative, such as the 1953 one from Herald Tribune, in which the critic described the joint exhibition of Twombly and Rauschenberg at Strable Gallery as the worst show of the season.

Cy’s art falls within the time brackets of a global movement called pop art, but even then, he would focus on a different style of narration, combining ancient, classical and contemporary poetic traditions. His works are characterized by the use of letters, leading some to argue that he may have had an influence on the emergence of what was soon to be known as graffiti.

But Cy’s ‘footprint’ in the art world isn’t limited only to his paintings reaching skyrocketing prices at auctions at Christie’s or Sotheby’s. In 2001, at the Venice Biennale, he received the Golden Lion for lifetime achievement.  He also received the Imperial Prize of the Japan Academy, which is compared to the Nobel Prize in the world of fine arts.

Overall, Cy had quite an impact on the young generation as well as on public space architecture. In 2007, one young artist, who happened to be a big fan of his, kissed one of Cy’s paintings, leaving an imprint of his lips on an artwork worth $2 million. In 2010, Cy was offered to decorate one of the Louvre’s vaults. Despite some unflattering reviews from the 1950s, Twombly has achieved something he has worked on for several decades. His works now hang at the MOMA in New York, Tate Modern in London or in private collections around the world.  From 1959, when he moved to Italy with his wife Tatiana Franchetti, until the very end, he continued to make erotic allusions and naughty jokes, remaining faithful to the abstract, childlike movement of the brush.