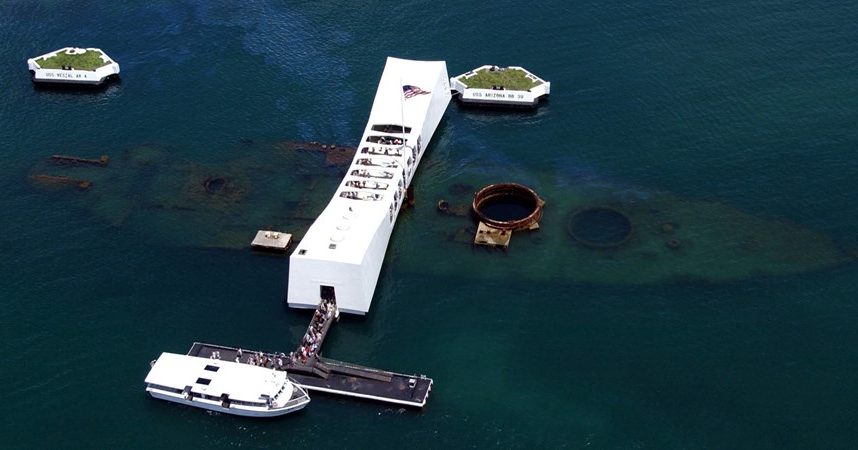 When we think of Hawaii, we tend to think of beautiful bays, Hula dancing, flower necklaces and Elvis Presley in his quirky shirt. For years, the Hawaiian archipelago has been a paradise for tourists, who flock there to enjoy crystal-clear water, colonial architecture and a blissful atmosphere. There is, however, one place on the island that’s visited by over one million people every year, and the purpose of their visit is anything but leisure.

The USS Arizona memorial at Pearl Harbor in Honolulu is one of those monuments that transmit a sense of carefully thought-out minimalism. On December 7, 1941, the military base located in the Pacific was swarmed with planes of the Japanese army, the purpose of which was to destroy the American fleet. In the event that marked the start of the all-out war between the country of the Rising Sun and the United States, five battleships were sunk, the most famous being the USS Arizona.

The bombed ship was left to rest on the seabed for good, right by the coast, and with it the 1,102 soldiers on that day. In 1962, more than two decades after the bloody event, a monument – a mausoleum – was inaugurated as a commemoration of the fallen soldiers, but also as a warning to the world that says: “No more war!”.

The author of the project was Alfred Preis, an Austrian architect who, due to his Jewish origin, emigrated to the States and settled in Hawaii. Interestingly, after the attack on the military base, he was interned for three months, like other citizens of German and Japanese origin (in 1938 Austria was annexed to the Third Reich).

In his most famous work, Preis focused on simplicity, because in a place like Pearl Harbor, the form should not overwhelm the content. The result is an eloquent piece of work that appeals to the senses and invites melancholy.  The most important element of the memorial is the wreck of the USS Arizona, with its fallen crew lying at the bottom. A white rectangular building was erected above the battleship, housing a meeting place and a temple with a plaque on which the names of the victims were engraved.  It was positioned across the sunken ship, which makes it like a cross from a bird’s eye perspective.  The minimalistic shape carries a number of symbols, such as seven large windows referring to the date of the attack. In a specially cut-out hole in the temple’s floor, a wreck can be seen under the surface of the water. It has become a tradition for visitors to throw flowers into that we’ll as a tribute to the dead.

The form of the building divided public opinion. Its critics compared it to a crushed milk carton. Preis was not indifferent to those voices, explaining that the broken roof in the middle was an allegory of an initial defeat, which nonetheless didn’t affect the durability of the fired base.

The USS Arizona is an unforgettable symbol. To this day, oil continues to leak from damaged tanks, and its stains on the surface of the water are known as „Arizona tears”. And is there anything more symbolic than the tears that fall down the cheeks of all those affected by the horrors of war?