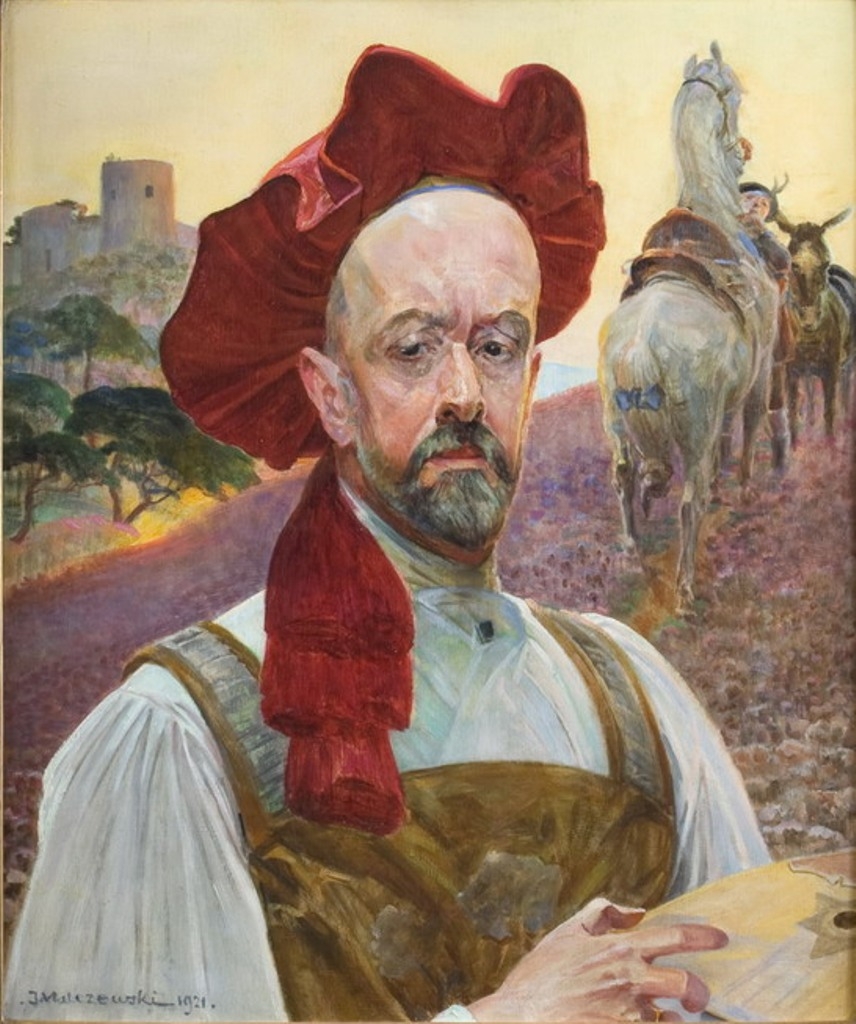 At the beach, in a night club bathroom, alone or with friends. It wasn’t so long ago that selfies took over social media by storm, with people all over the world getting dozens, hundreds and even thousands of tokens of appreciation in the form of thumbs up and heart icons. But the concept of selfies isn’t exactly new, only the name is. And looking at the amazing output of one of the most original Polish painters, Jacek Malczewski, one can’t stop to think just how wonderful it would be if he had an Instagram profile. One thing is for sure, it wouldn’t be boring!

This most famous of all Polish symbolists was born in 1854 and while he got his education under the watchful eye of Jan Matejko himself, he did not share his master’s passion for history painting. Instead, worlds created by Malczewski are full of metaphor, nuance, symbolism and mythical figures, which isn’t to say that more patriotic motives, longing for a free homeland and the martyrology (suffering and martyrdom) of the Polish nation didn’t play an important role in his oeuvre.

Malczewski as a self-portraitist is your typical narcissist, ironist and jester, whiile retracing dozens of his works reveals a great deal about his evolution as an artist and beyond. In his Self-Portrait with a Palette of 1892, we see a dignified, carefree thirty-eight-year-old, whereas his later works such as Self-Portrait in White Dress or Self-Portrait in Armor are both proof of a certain audacity and self-mockery. It is not surprising, then, that Malczewski’s colleagues accused him of being a phony with a particular flair for “dressing up”.

Malczewski the artist proved to be quite a proud, temperamental and sensitive figure in real life. In 1896, he began his teaching career at the Krakow School of Fine Arts, but four years later, in 1900, he abandoned his studies after a tit-for-tat with the then rector. He wouldn’t return until a decade later when a good friend of his took over the previous rector’s post. Malczewski’s emotional life was also full of ups and downs. A one-sided love for his cousin, an unhappy marriage, and finally, a years-long romance with a much younger (25 years younger, to be exact) Maria Balowa all reflected on the artist’s work. Primrose, a 1905 self-portrait alongside his wife, and Self-Portrait with Muse three years later, in which the mythological character gets a face of his mistress, are separated not only by time but also – or one should say: above all – by what they represent.

The Radom-born artist was many things but banal, conventional or politically correct weren’t any of them. Admiring Malczewski’s oeuvre now brings to mind the cult comic series Where’s Wally? if we consider that Malczewski was as eager to lend his face to numerous figures, including biblical and mythological ones. And not just any figures at that, because even his Christ in Emmaus is the artist himself, just long-haired, while his self-portrait Polish Hector symbolizes the painter’s aspirations for Poland’s independence. Nobody ever said that modesty was the only way to go, did they?

Jacek Malczewski died in 1929, leaving behind dozens of outstanding works that let us retrace his evolution as an artist and a human being – some refer to the passage of time, others to political changes, while others still to complex emotionality. What remains, however, is the artist’s authentic, allegoric style that’s not easily forgotten.

Self-portrait with a palette
https://pl.wikipedia.org/wiki/Autoportret_z_palet%C4%85_(obraz_Jacka_Malczewskiego)

Self-portrait with a Clover Flower
https://rynekisztuka.pl/2020/10/14/autoportret-z-kwiatem-koniczyny-autorstwa-jacka-malczewskiego-na-aukcji/

Self-portrait in a Yakutsk cap
https://pl.wikipedia.org/wiki/Autoportret_w_jakuckiej_czapce

Primrose – self portrait with wife
http://www.muzeum.edu.pl/pl/radom/%E2%80%9Emoja-dusza-oblicza-kobiet-w-tworczosci-jacka-malczewskiego%E2%80%9D-,1189.html

Christ and the Samaritan woman https://pl.wikipedia.org/wiki/Chrystus_i_Samarytanka_(obraz_Jacka_Malczewskiego_z_1909)

Handover of a pallet
https://mnk.pl/zbiory/autoportrety-jacka-malczewskiego