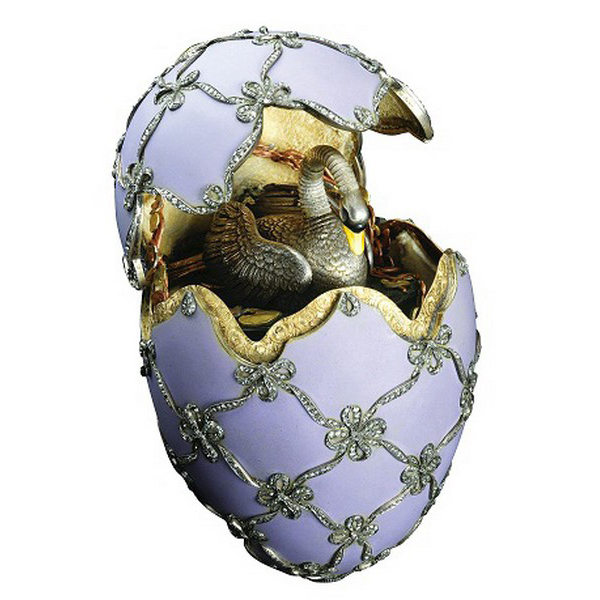 What gifts do we value the most? A book, a perfume, a piece of jewelry, a massage voucher, a gadget, or perhaps… eggs? And it’s not about chocolate sweets with a surprise inside, although we love those too!

Fabergé eggs, as they’re the ones we’re referring to, are intricate and extremely expensive mini-works of art, the history of which dates back to the 1880s. So let’s travel back in time, all the way to tsarist Russia when Saint Petersburg was one of the trend-setting cities. On the occasion of the upcoming Easter, the then-reigning Tsar Alexander III ordered a special gift for his wife Maria Fedorovna. In 1885, an inconspicuous egg, hiding a figurine of a small hen, gave the start to a priceless collection which to this day electrifies fans of precious jewelery.

The creator of the curio in question was Peter Carl Fabergé, who – we could say – was born a goldsmith. For the next nine years, the tsar, on the occasion of the upcoming holidays, would place an order for the beautiful gift for the empress. And Fabergé’s workshop would outperform itself in sophisticated decorations, precious metals and the creativity of surprises hidden inside the eggs. Thematic motifs often commemorated important events. In 1891, one of the most elaborate eggs was created: a miniature of the “Memory of Azov” ship was placed inside a dark green shell, decorated with golden ornaments. It was on board this ship that the son of the tsarist couple, Nicholas, made his trip around the world, which, rather curiously, was supposed to be a punishment for the tsarevich’s scandalous love affair.

After his father’s death in 1894, Nicholas II assumed not only the throne of the Empire, but also the costly artistic tradition. The new client, however, would order not one but two eggs every year as gifts for Alexandra Feodorovna’s wife and her widowed mother. Each of the women received a total of twenty-one jewelery wonders, the delicacy, elaborate workmanship and creativity of which remain unmatched. Be it a coronation egg in the form of a golden carriage, given to the new Empress in 1897, or a transparent egg with a peacock figurine as a gift for his mother on the occasion of Christmas in 1908, they are all testament to the richness of the tsarist collection and the amazing abilities of the extraordinary goldsmith who made them.

The popularity of Fabergé grew with each work, and in addition to the royalty, he also received inquiries from Russia’s elite. The largest, non-tsarist collection of seven eggs was a gift for the wife of the Russian aristocrat Alexander Kelch.

The beautiful tradition came to its end with the Bolshevik revolution of 1917 and the brutal murder of the tsarist family. During the escalating campaign against the representatives of the bourgeoisie, Peter Carl Fabergé was forced to close the workshop and flee Russia. Through Germany, he made his way to Switzerland, where he died in 1920. And although the history didn’t spare the tsarist world, and the valuable collection ended up scattered around the globe, the memory of it and of the talented artist behind it have survived the turmoil of the last century.

The greatest experts in decorative art strive to find and trace the history of each exhibit. And when every few years one of the eggs comes out of the abyss and appears at an auction, it is celebrated like the Holy Grail of jewelry. As can be easily guessed, it sells for exorbitant sums of money, sometimes tens of millions of dollars. Meanwhile, the Fabergé workshop, resurrected after many years (although not in Russia anymore) enriches the precious collection with new wonders.

All pictures are from:
https://www.faberge.com.pl/jaja-faberge/