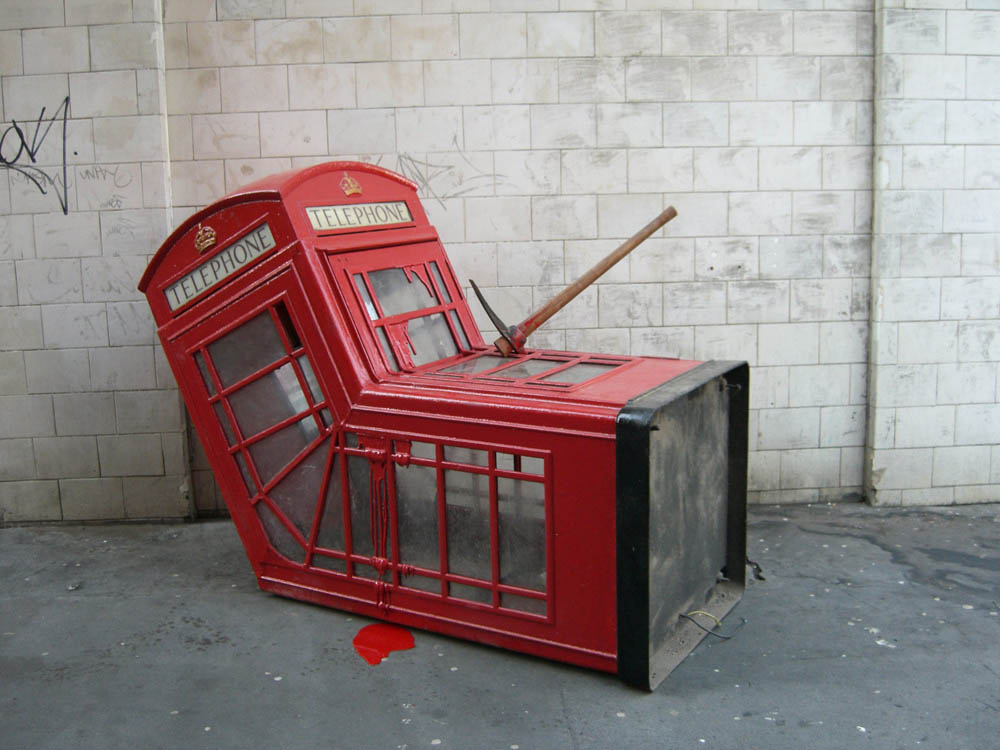 Although everyone has heard about Banksy, the artist has managed to remain anonymous in the era of widespread surveillance, CCTV and nosy paparazzi. Street art, that comes out of his spray cans and stencils, is an excellent example of socially engaged art. Banksy presents reality in a very accurate, blunt and uncompromising way and each of his works is a commentary that prompts heated discussions about the current political, economic and social phenomena.

That said, not everyone may know, that Banksy isn’t only a graffiti artist, but also creates sculptures and installations. Some are in response to current events, others simply add color to public space and make passersby smile. One such example is the statue of Frederick Savage, where Banksy put an ice cone in his hand and stuck a pink tongue to his mouth. Still, among the British artist’s works, many remain a bitter commentary on the state of today’s world.

Cardinal Sin is a bust of a priest with a blurred face. The face is covered with square tiles to create a “blurred” effect similar to that used to cover the faces of alleged criminals. This was in response to pedophilia scandals, that were being occulted by the Catholic Church for decades. The title itself, Cardinal Sin, has a deeper meaning and may refer to both one of the seven sins mentioned in the Bible or simply a sin committed by a cardinal.

Another work that touches on the theme of religion is Grappling Hook. The cross that serves as an anchor is the artist’s criticism of the situation in the West Bank, where clashes between Palestinian groups and the Israeli army are commonplace. The anchor, which symbolizes stability and shelter, represents here something, that literally brings us down, pulls us towards the bottom.

Moving on, Banksy often criticizes consumerism, as reflected for example in his work Christ with Shopping Bags in which the crucified Jesus holds shopping bags in his hands. Banksy used the same motif in his sculpture Happy Shopper, where he reinterprets the statue of an ancient woman by making her wear edgy sunglasses and carry a bunch of paper bags. While the result isn’t as controversial as the image of Jesus, its message is just as bitter.

An interesting example of reinterpreting someone else’s work is Banksy’s The Drinker, showing a seated man with his chin resting on his hand and a street cone on his head. It’s an obvious reference to Auguste Rodin’s The Thinker, whose serious work is satirized by Banksy. And even though alcoholism isn’t exactly a laughing matter, it’s hard not to crack a smile, when there’s a man with an orange cone on his head.

Nike of Samothrace with a CCTV camera instead of a head alluding to omnipresent surveillance, a cardinal compared to a criminal or a dead telephone box symbolizing the new ways in which humans communicate with each other are all examples of works, whose goal is to make us leave our comfort zone and channel our mind towards topics and issues that are often inconvenient. But if so, has Banksy been successful at it? In our opinion, without a shadow of doubt!

Death of a Phone Booth: https://www.banksy.co.uk/out.html