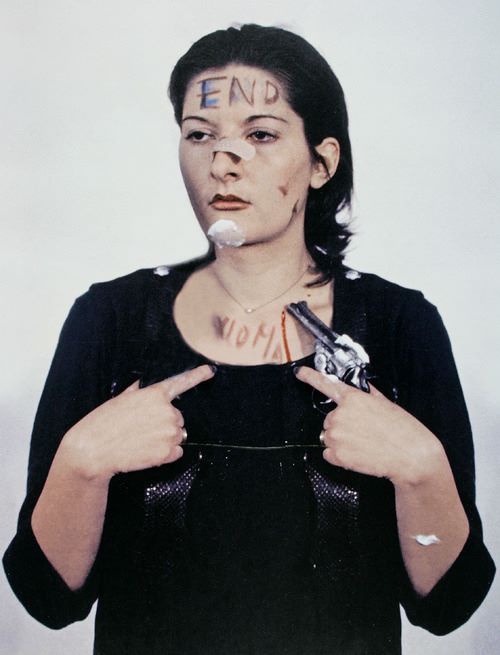 A young twenty-eight-year-old woman stands still in the middle of the stage, in front of her is a table with 72 items, and around there are people, a lot of people. The year is 1974 and the protagonist of the event in question is a Serbian artist-performer named Marina Abramović.

The rules of Rhythm 0 were simple. Marina Abramovi’s body was to become, for 6 hours, a medium with which the viewers gathered at Studio Morra in Naples could do whatever they wished. Those random “artists” had at their disposal whatever Abramović herself left there for them, with the items varying from a pruned rose, feathers, honey, bread, perfumes, sharp tools such as scissors, a metal rod, a scalpel, or even a loaded gun.

What for? To uncover and explore human fantasies, fetishes and boundaries that sprout and blur when given the greatest power there is, that is, the power to decide about one’s body. Recordings of the event are both terrifying and distasteful. Initial shy acts such as hugging and kissing soon turned into acts of aggression. The artist was stripped of her clothes, had her intimate zones touched, and her skin was cut with razor blades. One person drank blood from the wound on Abramovic’s neck. And although it sounds like the plot of a horror film, the culmination of the dangerous practices was the gun put to Abramovic’s head, with her own hand resting on the trigger.

Paradoxically, it was that very situation that showed the true and complex colors of what makes a society. In response to the group of – let’s not be afraid to call a spade a space: – sadists, a group of defenders formed. It was them who prevented the use of firearms which led to a scuffle in the audience. After the agreed six hours’ time, Marina got up and headed towards the audience and her tormentors. However, the audience suddenly scattered for fear of looking the artist in the face. As she herself emphasizes, Rhythm 0 taught her that if you don’t follow clear rules, people will stop at nothing, including killing a complete stranger, an innocent person, but when it comes to confrontation, their self-confidence and cruel fantasies are overshadowed by fear.

Someone might consider Abramovic crazy, saying she got what she asked for. But hey! The thief isn’t driven by circumstances but by their lack of moral values. Abramovic’s brave performance remains to this day an exceptionally difficult and equally interesting social and psychological experiment. Art doesn’t always have to be beautiful, smooth and pleasant; sometimes, as in the case of the Serbian artist, it can be a journey into the darkest corners of the human mind.

Sources
Photos are from the film Marina Abramovic on performing “Rhythm 0” (1974)
youtube.com/watch?v=xTBkbseXfOQ