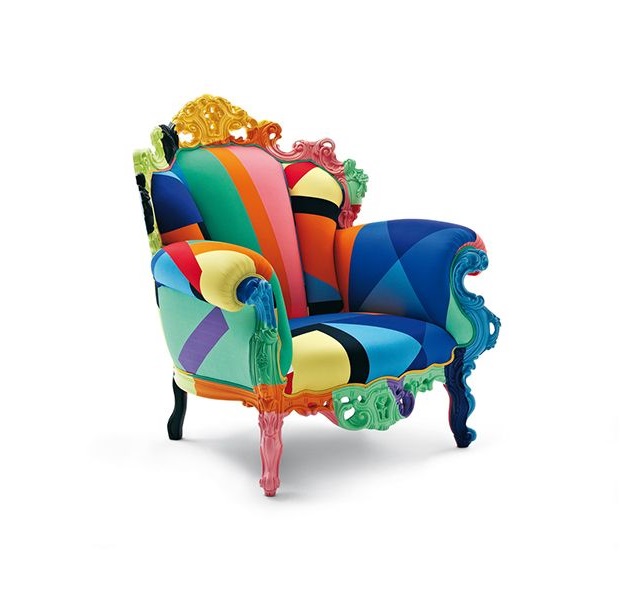 Proust in an armchair

Alessandro Mendini is an architect and designer known for balancing out extremes in a way that no one else would think possible. An armchair is an example of this out-of-the-box thinking, which has become Mendini’s trademark. The 1978 “Proust” model is a cultural collage that we’re about to delve into.

Let’s start with the name. Proust, or more precisely Marcel Proust, reveals inspiration in literature standing behind this Italian design. The question is, how does the figure of Proust fit in all this? Mendini studied Proust’s biography and learned that the French author had a bit of a thing for Impressionism. That is why the first version of the armchair was finished with a fabric with characteristic colorful spots typical of this painting style. Now that we have the Proust-Impressionism duo, why not throw in some of that good old Baroque! It is the baroque-inspired, imposing frame of the armchair that makes the whole look so absurd!

It was this piece of furniture that became a turning point for the artist. Mendini had long been occupied with finding out the limits of what a designer could create, since everything was already invented and the amount of furniture and equipment is unimaginable. The Proust armchair proved the best thing a designer can do is take a creative approach to what already exists, as it opens up an inexhaustible source of artistic possibilities. The concept of “re-design” has given contemporary works a completely new panorama. Since then, the “Proust” armchair has lived to see a few more variations of the original model: one is “Proust Geometrica” and the other is a single-color model that comes in several shades.

Alessandro Mendini is famous not only because for his colorful armchair. His designs, which have permanently entered the world of design, also include a flashy sofa inspired by the sculptures of Wassily Kandinsky. It would be difficult to find a piece of furniture more unusual than that one. Another design, light, fun and very handy is Mendini’s corkscrew. How can a corkscrew possibly be surprising, I hear you ask. But what if I tell you that Mendini was inspired in its design by his fiancée Anna and that the corkscrew represents the smiling face of a woman with a bob haircut while its drill part is housed in a plastic casing resembling a long dress. Like with every love affair, it takes two to tango, and so the “Anna G.” model was several years later joined by her counterpart “Alessandro M.”

Alessandro Mendini passed away in February 2019, but thanks to his absolutely unique designs, he remains a prolific source of influence, inspiring next generations of designers and adding a little color to our everyday life.