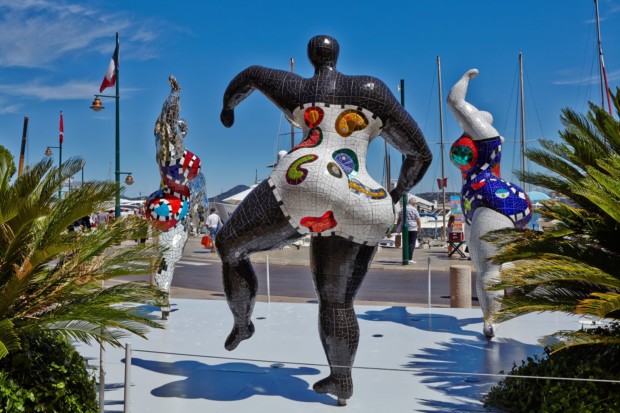 The female body has been given different meanings in different periods of history. What’s clear is that it possesses tremendous strength, both physical and metaphorical. Being literally the source of new life, it has been an inspiration for artists, a backdrop for important historical events, and a go-to solution for advertisers who tend to use scantily dressed models to attract attention – you know, just your everyday scene of a woman in bikini operating a chainsaw. Over the years however, the ideal female body type would change. Nowadays the overriding motto is that there is in fact no ideal, that beauty comes from diversity, and that our focus should be on health and well-being, not on dimensions. And so we’re back to where we started: the female body can be a manifesto and a tool of emancipation.

Nana means chick. Or, in the case of the French artist Nikki de Saint Phalle, a whole bunch of chicks that one can’t help but hang their eye on. Although the 1960s series of colorful, slightly provocative sculptures depicting rounded dancing women outraged the public back in the day, it would now fit perfectly into the body-positivity trend. This shows just how ahead of her time the sculptress was, having been herself a model once featured on the covers of top fashion magazines. The inspiration for the first Nana from 1965 was the artist’s friend’s pregnancy and her changing body. Another, Hanover’s three wild friends, is a manifesto of female strength and liberation in the urban space.

From affirmation of fertility to breaking taboos. In 1966, Nikki de Saint Phalle gave vent to her inner rebel and the need to deal with the difficult past, marked by her father’s abuse, by creating a controversial installation entitled Hon. En Katherdal. It was made specifically for the world’s first exhibition on eroticism, held at Moderna Museet in Stockholm. For someone intimidated by sexuality and eroticism, the 28-meter figure of Nana lying on her back with her legs wide spread was likely an astonishing experience. The artist was not afraid to challenge her audience, which is why it is hardly surprising that the entrance to this large artwork led through a vagina – the place where both life and pleasure begin. By crossing these rather unusual gates, visitors could head to a cocktail bar, a mini-cinema or a gallery with works by famous artists. The artist, as she herself stressed, perceived her Nana as a “temple of entertainment”, because the most important takeaway is that the woman is the only one who has the right to define her body, and if she chooses to derive enjoyment from it, she’s free to do so and nobody can tell her different.

De Saint Phalle’s sculptures were made largely of polyester, whose fumes were later proved to be highly toxic. The irony of fate meant that the works that were supposed to to free the artist – from stereotypes, from her past, from limitations in general – led to her death from respiratory failure.