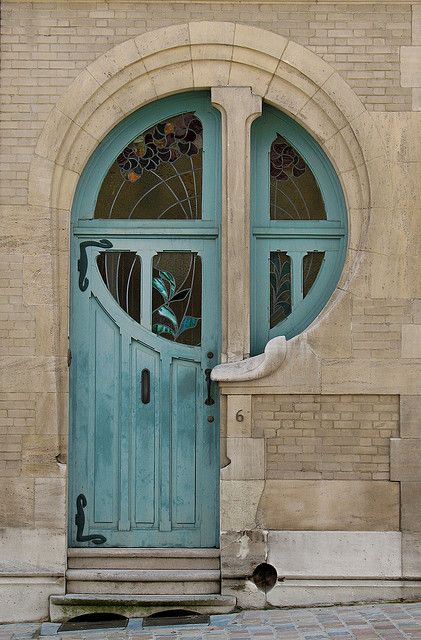 Europe, the turn of the twentieth century. Architects and their clients are slowly starting to reject the previously predominant historicism – a trend that draws heavily on old styles such as the Baroque and Gothic Art. Many agree that the new times call for a new expression and a separate style that can capture the peculiarity of the era. This is when the Modern Style, commonly known as Art Nouveau from French, enters the picture and takes the world by storm. It is the first style to spread across nearly all branches of art on such a large scale. Painting and architecture aside, it was equally well reflected in cutlery, wallpapers, furniture, and even fashion and city infrastructure. Talk about new!

But what does art nouveau mean? In general terms, the style uses a flexible line, faunal and floral motifs, color, bold ornamentation, as well as stylized geometric forms. One of the more interesting themes found in Art Nouveau is the omega motif, eagerly employed in the design of door and window frames. Meanwhile, the distinctive pattern of chestnut leaves is mainly the domain of the architecture of Western European Art Nouveau. It reflects the urban character of the style, as it coincided with chestnut trees being planted in the newly created parks and public gardens of cities willing to embrace modernity.

Compared to other currents, Art Nouveau is more of an episode, which lasted from 1890 to 1925 and whose heyday was in the year 1905. Needless to say, the architecture of that period had both its own capitals: Vienna, Paris, Barcelona, ​​Glasgow or Lviv, as well as superstars: Hector Guimard, Antoni Gaudi, Otto Wagner, and Charles Rennie Mackintosh. In what Art Nouveau architects differ from their predecessors is their creative freedom where innovativeness and imagination are given top priority. The result is a wealth of amazing designs scattered all over the European continent.

The examples of art-nouveau tenement houses, company offices and administration buildings are too many to count. One of the flagships of this trend is the Vienna Secession Building. Famous for its impressive golden dome, it was originally designed as the seat of the Association of Fine Arts of the Austrian Secession, which brought together young artists opposing the conservative academic circle. In Vienna, as is also the case in Paris, it is not the tenement houses that make the greatest impression, but the beautifully designed subway entrances. Art entering public space, moving with the spirit of modern times – this is one of Art Nouveau’s mottos. Artists of that new era recognized the importance of introducing aesthetic values ​​into the urban tissue, a notable example of which is Barcelona’s Park Güell, a high-class residential estate designed by Gaudí in the heart of Barcelona which ​​today is one of Spain’s greatest tourist attractions.

Over time however, the richness of forms and ornaments proved too overwhelming, and as is typical in art, new creators turned to much more minimalist and simpler forms, thus paving the way for the era of modernism. Today, many cities pride themselves on their Art Nouveau heritage, as evidenced by the European Art Nouveau Route founded in 1999, in which Poland is represented by the city of Łódź.

The Glasgow School of Art
https://www.artlyst.com/news/glasgow-school-of-art-a-burnt-out-toxic-culture-clare-henry/