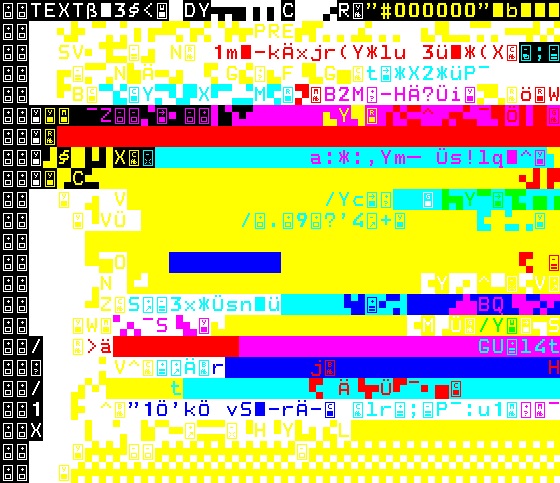 the art of errors

“Glitch” is a term that will sound familiar to most video-game players. It describes different types of visual errors, such as missing textures or characters getting stuck in walls. Over time, the term has also made its way into the world of art. Glitch art, being an example of net art, is becoming increasingly popular. But what is it exactly?

If we were to use a dictionary definition, glitch is a piece of data that is either faulty or poorly converted when being transferred from one environment to another. The most obvious example that comes to mind is when we try to open an image in a software that does not support that particular format. As a result, the image will get distorted or launch as a text file containing a long chain of mostly meaningless numbers. Glitch art draws inspiration from such digital faults, turning this undesirable malfunction into something interesting and engaging.

What does glitch art look like? Image pixelation or fragmentation, that is shifting certain elements within a composition, as well as color degradation are some of the most common techniques that give glitch art its surrealistic flair. Glitch artists also recur to the use of “noise” and “grain” – treatments reminiscent of poor-quality VHS films.

How is glitch art created? The main technique used in glitch art is called databending, which consists in a deliberate manipulation of a certain media format via software that is not compatible with that specific file extension. These experiments create distorted images that challenge our sense of perception. The rising popularity of this trend is evidenced by the fact there are already online tools where one can process graphic files without the need for any additional software.

How to interpret glitch art? As is often the case with art, there isn’t a one-size-fits-all answer. For some, distorted images are a sentimental journey to the 1980s, when the first computer games became available to the public, and with them came glitch. For others, it is a social critique that, by means of exposing faults, calls into question our unconditional trust in novel technologies which we like to forget can still be unreliable.

It is up to each of us to decide what we want to understand by glitch art: be it colorful, eye-catching compositions that stimulate our imagination, or an expression of discontent with new technologies that are increasingly invading our daily lives. Whatever the case may be, the fact remains that glitch art turns an error into something creative, breathing into it a new quality, which itself is proof that new technologies do not necessarily kill creativity but rather awaken and stimulate it in new ways.