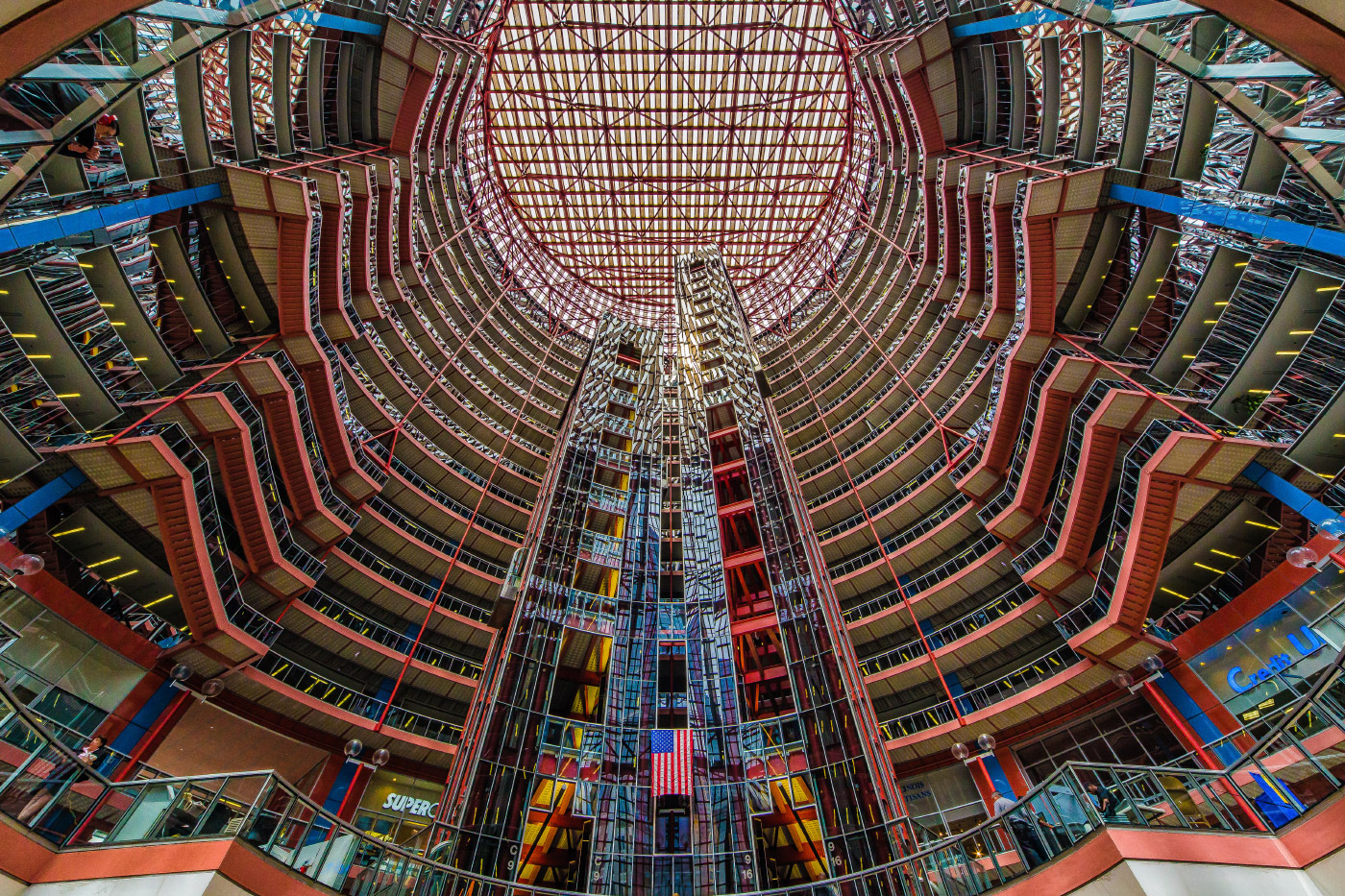 The 1980s – Madonna releases her controversial album “Like a Virgin”; Diego Maradona leads Argentina to victory in the ‘86 World Cup in Mexico; Patrick Swayze’s performance in Dirty Dancing makes him an idol of millions of women around the world; and the disco style rules fashion with its bright clashing colours, polyamide fabrics, curly bouffant hair for ladies and mullets for men. Even  the architecture of the 80s, which we normally typically picture as grim Plattenbau housing developments, has a much more playful side to it.

Modernist architecture, with its austerity, its lack of ornament and its emphasis on functionality, has been prevalent in urban development since the 1920s. As time went on, both architects and city dwellers began to long for more individual expression. In the 80s, these growing tendencies finally erupted with an unparalleled creativity and a variety of forms. The clean uniformity of modernist buildings from the preceding decades gave way to the abundant use of ornaments and free quotations of historical styles in these new designs. The architects, no longer restricted by rigid doctrines, began to see facades as costumes: in the way frivolous fashion was a game of self-expression, architecture too set out to wow with its exteriors.

In the late 80s, two conceptually similar developments were built in Japan and Poland: the Labyrinth housing complex in Tokyo and the Centrum E residential development in Kraków. Both were finished off with pastel hues (predominantly shades of pink) – a good example of new, bold colours appearing in postmodern architecture. When compared to its Japanese counterpart, Centrum E may seem conservative; however, we need to keep in mind the restrictions imposed by the communist regime in Eastern Europe.

The postmodern movement also challenged the preconception that architecture has to be serious and dignified. Take the Owl Cafe in Albuquerque for example. With a giant owl on the facade towering over neighboring buildings, it is a playful spin on the traditional American diner.

A true epitome of postmodernism is the former Mazda showroom in Tokyo built in the late 80s. An  enormous, out-of-proportion, single ionic column stands in the middle of the building. It is reminiscent of classical architecture but instead of supporting, it further divides the heavily deconstructed facade. Indeed, the fragmentation of forms and buildings is one of the most characteristic features of postmodern architecture: the iconic building of the Higher Theological Seminary of the Congregation of Resurrectionists in Kraków exemplifies this trend well.

The liberty of the 80s was like a breath of fresh air after the apathy from the previous decades. The comeback of ornaments, decorative facades and forms borrowed from classical architecture illustrates a universal truth – styles come in full circles and subsequent generations give them their own interpretation. Forward-thinking design of the 80s was a prelude to even bolder and more campy architecture of the 90s. This is particularly visible in Poland, where postmodernism became a manifest of liberation from the communist regime.

Higher Theological Seminary of the Congregation of Resurrectionists
pic. by Paweł Mazur
http://bankfoto.info/zdjecia/dji_0125_0410_zmartwychwstancy/